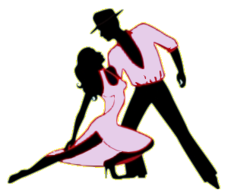 OUR HISTORY - AS TOLD TO PAUL S.
​  I’ve been writing “The Spotlight” for a long time, but now I have a special gift for all of you.  This story covers

over 50 years   of the Staten Island Ballroom Dancers, Inc., as seen through the eyes of two long time members,

I personally thank Lou Motola for writing this story.

Ballroom dancing was such an important pastime to a group of avid dancers on Staten Island that they decided to get together and form a dance club.  This became a reality on November 21, 1961 in the Forest Dance Studio when charter members Charles Fricke, Les King, Seymour Lasher, Charles Roveda, Anton Ossman, Jim Smith, Howard Sohm and Art Spaulding founded the Staten Island Ballroom Dancers, Inc. (referred to in this text as “the club”). Officers were elected, committees formed, and $5.00 was collected from each couple to purchase needed supplies.  A lot of time and effort was spent in writing the bi-laws, constitution and working rules.  A charter was prepared, legal steps taken, and it was time to incorporate.

On December 5, 1961, an open meeting was held in the Forest Dance Studio where invited married couples who had taken dance lessons and showed a keen interest in dancing where inducted into the newly founded club.  It was at this very first meeting that Sam and Rose Rutigliano joined the club.  While Sam has passed on, Rose continues as an active member of the club to this day.

Initially there was a limit of 50 member couples (changed to 75 member couples in 1973.)  Dances were held at the Plaza Casino, where there was occasionally live music.  The public was invited in order to raise funds for the newly founded organization.  Once equipment was purchased, a dance committee was formed to play music at the Plaza Casino dances and only members and guests were allowed to attend.  At first, only drinks and coffee were provided with boxed cupcakes placed on each table.  The dancers brightened up the casino as they worked their magic gliding in the line of direction in perfect harmony and clad in gowns, gloves and suits.

The club then moved to St. Adalbert’s two halls where members met on the Saturday morning prior to a dance to “set up.”  This involved cleaning the old hall, carrying tables and chairs from the new hall, putting up decorations and the club’s banner, stringing lights, purchasing  ice and snacks, ordering soda, cutting paper table coverings for each table, placing centerpieces, etc,   That evening, coffee was made and donuts were served.

Of course, everything had to be reversed at the end of the evening.  All the equipment, music, decorations, supplies, etc. had to be taken home and stored in someone’s house/garage until the next affair. A similar routine happened in the other hall (the gym).

These were BYOB dances where members mostly supplied their own refreshments.  On special occasions, we made trays of cold cuts or catered buffet dinners.  It was tons of work but it was a lot of fun as well!!

When St. Adalbert’s was no longer available, we rented Colony Hall where the same procedure as above took place.  There was no air conditioner and we remember one hot night when we opened all the windows, and the mosquitoes had a feast!!

We also held dances at St. Peter’s Church Hall and Staten Island Academy where this procedure of transporting materials back and forth continued; however, these halls had air conditioning.

Thereafter, we had formal holiday dances at Wagner College, Labetti Post, the Crystal Room, and presently, The Old Bermuda Inn.  New Years Eve affairs continued at the Crystal Room for many years.  These events were chaired by Tony Conte and Lou Motola.  Dinners or buffets were provided at these events.

During the early years, executive meetings took place in the homes of the presidents.  Regular meetings and socials were held in several places including Joe’s Question Mark, Huttner Pasqualini Post, Christ the King Council, and currently at Moravian Hall.  In additional to business and social dancing, special events were held such as the Children/Grandchildren Holiday parties, Christmas parties complete with Santa Claus on occasion. Traditionally, our pizza nights were always fun and our close family-like greetings of a hug or a kiss are well known.  Everyone knew each other by first name.  This included their children.

Besides our own club functions, we also got together and went to dances in New Jersey; like the Imperial Ballroom, Mehegan’s, Shaffer’s, and Kathy’s. There were weekend trips to the Concord, Brown’s, The Nevele, and even cruises which often found a group for the “Family” known as the “Ballroom.” ``Because of this bond of friendship, we continue to meet as a group for sad occasions, as well as to offer support to our members who may have lost love ones; and cards are sent to members who are hospitalized; and so, our ballroom club is so much more than just a dance club.

We have been so fortunate to be part of this wonderful ballroom club, a gift given to us by our charter members, and kept alive by the presidents, officers, and committees who have devoted their time so generously; and all of our members whose interest and support have kept us strong and close through over 50 years.

We look forward to many more dances as we take time to salute our Ballroom Club, The Staten Island Ballroom Dancers, Inc.